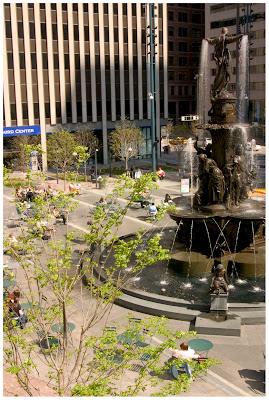 This past Saturday was a great day. It started at Fountain Square where I met up with several friends. The Square was crowded, the Reds game was on the LED board, a wedding party posed for pictures and horse-drawn carriages were in high demand.

Chris, Jake and myself went for a walk around Downtown to take some photos and enjoy the beautiful, albeit windy, weather. We eventually made our way over to the historic West Fourth Street area. Just after checking out the progress on the McFarland Lofts project we looked up at the new Parker Flats midrise and saw 5chw4r7z and Ms. 5chw4r7z with a couple friends enjoying their wrap around balcony.

They invited us up to check out their digs which we discovered to be a chic urban living space complete with ‘city doors.’ We arrived just in time to see the Bengals make their first selection in the 2009 NFL Draft and were pleased with the selection of an offensive tackle.

We worked our way back to the Square where Sherman and Chris had dinner on Via Vite‘s rooftop terrace. I worked my way further north into Over-the-Rhine where I met my father for dinner on Lavomatic‘s beautiful rooftop terrace.

Following dinner I met back up with Chris outside of Park + Vine and we walked down to City Cellars where we met a couple more people and had a couple glasses of wine out on City Cellars‘ patio. We then worked our way south, en route to the Cyclones game at US Bank Arena, stopping at Chipotle on Fountain Square for a quick bite for our other friends who had not yet eaten.

We arrive a little late to the Cyclones game and noticed we were already trailing 3-1 which quickly became a 4-1 deficit. Right about this point a t-shirt was launched from a canon in my direction. Making quick use of my eye-hand coordination, I snatched the t-shirt out of the air and savored my prize.

The third period hit and the Cyclones had charged all the way back and tied the game at 4-4. To overtime we went and the Cyclones quickly scored ending the game and taking a 2-0 series lead. After the game finished we split off as our two friends went to JeanRo Bistro for some drinks while Chris and I went to go meet up with Sherman once more in Over-the-Rhine.