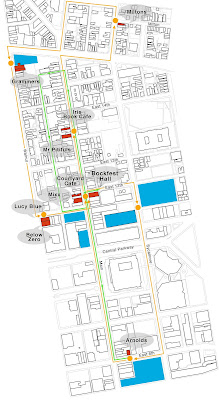 In case you haven’t heard already, the annual Bockfest celebrations are taking place this weekend (3/6 – 3/8) starting with the opening of Bockfest Hall (formerly Jefferson Hall) at 4pm on Friday, followed by the Bockfest Parade at 6pm.

Bockfest started in Cincinnati in the 1800s and is the world’s oldest Bock festival. The celebrations stem from the glory days of Cincinnati’s many brewers (at one time producing more beer per capita than any other city in the U.S.). During that time a tradition developed amongst the brewers to release all of their bock beer on the same day – marking the end of the winter brewing season and the beginning of the spring.

This year’s celebration will include sub-subterranean tours of Cincinnati’s prohibition past (all 13 sold out), subway tours (all 3 sold out), the parade, glass blowing, Sausage Queen competition, book signing, live music, and of course lots of beer drinking at some of the best German bars in the city.