Like many small businesses, Cincinnati’s favorite eclectic deli has aspirations to expand beyond its current location in Northside. Melt Eclectic Deli has been consistently rated one of Cincinnati’s best vegetarian and sandwich options, and is a staple in the diverse and vibrant Northside neighborhood business district.

In July 2008, popular green general store, Park + Vine, started offering sandwiches, noodles and other vegan fare from Melt. The offerings have been a popular addition to the Park + Vine food and drink collection. Park + Vine owner, Dan Korman, goes on to say that the two businesses have a very similar base of supporters. “We routinely hear people say they’re on their way to Melt or that they just came from there,” Korman says, “and that’s saying a lot considering our two businesses are five miles apart.” 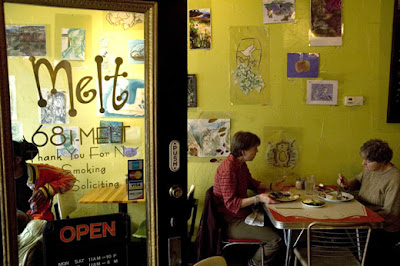 The kinship between the two stores has grown beyond the food offering at Park + Vine (GoogleMap). The two stores are now offering a cross-coupon promotion good through March 31st: when you buy one menu item at Melt greater than $6, present the Melt coupon and receive $2 off a second menu item of equal or lesser value. While you’re there, pick up a Park + Vine coupon for $10 off a purchase of $40 or more.

Melt has more plans though beyond the cross-coupon promotion and select product offerings at Park + Vine. Lisa Kagen, owner and business manager of Melt Eclectic Deli (GoogleMap), has told UrbanCincy that she is interested, and currently speaking with several property owners, about the possibility of a new store in either Downtown or Over-the-Rhine.

The popularity of Melt’s products at Park + Vine has led to speculation about a possible Melt location somewhere in the Gateway Quarter. Kagen says, “There is a lot at stake and many details still need to be worked out,” but she hopes to come to a conclusion by the end of the year.