Lytle Park is rich with history and is poised for a face lift. The park sits on the site of the Lytle family homestead that was built back in 1809. The homestead site then became known as Lytle Square and was then owned by the City of Cincinnati in 1905.

Lytle Square was then marked to be demolished to make way for the connection of I-71 to Ft. Washington Way. Public protests saved the parkspace and led the creation of what is known to be one of the first uses of air-rights over an expressway in the nation. Lytle Tunnel nows runs underneath this small yet important park in the south-eastern portion of Downtown.

The park also boasts an 11-foot statue of Abraham Lincoln that was a gift to the City from the Taft family. The Taft family connections don’t end there though as the Taft Museum of Art is located on the eastern edge of the park.

The park is now in the process of a master plan that will give the park a new look with new features. A couple new water features are planned, a new stair connection to Lytle Street (GoogleMap), new garden space, new streetscape along 4th, and more open lawn spaces for creative use are some of the key features of the plan.

At a November 20th public meeting the plan was “well-received” and no major changes were suggested. No specific timetable, budget or financing has been set for the changes, but the next step is to finalize a master plan with more specifics that will be taken to the Cincinnati Park Board for approval. 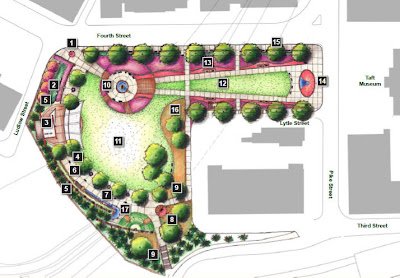