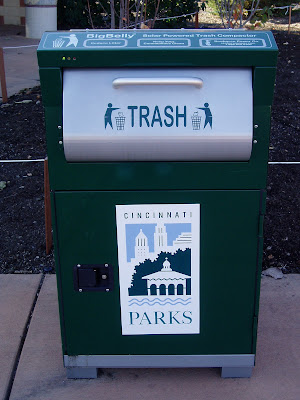 Today I was driving north along Jefferson, around 1:40pm, when I looked to my right and saw an overflowing city trash can at the NE corner of Charlton and Jefferson (GoogleMap). There was trash flowing over the edges of the can and spilled all around the ground next to it. At that time I remembered that just a couple weeks ago I saved the phone number for reporting such cases into my cell phone.

I called the number – 513.591.6000 – and reported the situation to a very friendly person on the other end. She asked the location and said she would enter it into the system and have a crew get to it as soon as possible. I later drove back by that trash can about 4 hours later and the problem was solved.

Not only was the trash can cleaned, but so was the previously trashed ground around the can. As a result I would like to thank/commend the City for such great service. It was prompt and thorough and is a service that everyone should take advantage of. City workers only have so many eyes, so a simple phone call to tip them off goes a long way.

Something I have seen and read about before are these solar powered trash cans that automatically compact trash, hold larger amounts and automatically alert workers when cans need to emptied. The Cincinnati Park Board already uses these cans in some of the City’s parks, but it is something that should be examined for high traffic areas around the city. It’s one of those situations where the upfront costs are higher, but is well worth it in the long run. They are attractive, hold more trash, automatically compact the trash (using solar power) and alert City workers when they are approaching a full state effectively preventing any messy situations from happening in the first place.