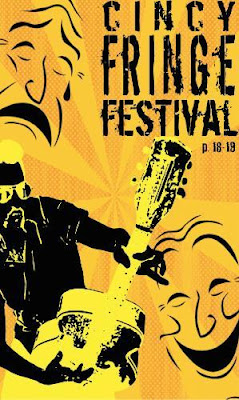 The 2008 Cincinnati Fringe Festival marks the 5th year of its existence. The festival started tonight at the Art Academy in Over-the-Rhine. Over the next 12 days, Downtown and Over-the-Rhine will support 20 different venues which will play host to a variety of art including visual, performance, and film. There will also be an ongoing mural installation on the south side of the Know Theatre over the 12 day festival.

The Cincy Fringe Festival is one of 20 active Fringe festivals in North America including New York, Philadelphia, San Francisco, and Minneapolis…with the original stemming from Edinburgh, Scotland which began 51 years ago.

Organizers are still looking for volunteers to assist in various ways throughout the festival. You can get involved by signing up online (it’s very easy). Volunteers get a Fringe Festival t-shirt for signing up for one shift and get two free tickets (to any Fringe show) for every shift you sign up for after that.

There is a lot more I could ramble on about, but you can get most of the information from the website. You can order tickets, get reviews, preview shows, and much more.