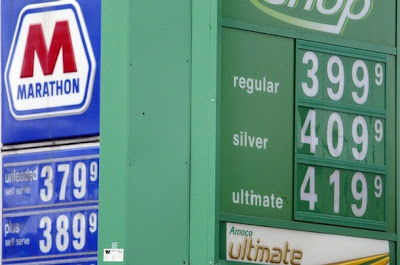 Gas is $3.65/gallon around many parts of the metro, and even higher in other parts of the country. As a result people are starting to combine trips, rethink purchasing that Hummer, and are generally looking for ways to cut their consumption – which is great.

At the same time politicians in DC are doing what they do best which is pretending as if they care about reducing our dependence on foreign oil. $3.59 sounds like a lot, but in reality it is still not high enough to cover the costs of maintaining our beloved road system. State DOTs, across the country, are going bankrupt and the feds are going to be hitting the red very soon.

The rise in prices is simply going to the foreign nations that are providing us the drug that fuels our addiction. At the same time our infrastructure is literally crumbling and we seem to have no backup strategy as to how to deal with modest gas prices (when compared to other developed nations at least).

So what’s an average citizen to do with these soaring gas prices and miserable economy? The answer is not pawning off your gold to pay for more gas. I would suggest moving closer to where you work, riding Metro (if possible), or carpool. These are all obvious solutions, but it seems that the location one gets overlooked quite a bit and is the one that can/will make the biggest impact.

Given that most people in this region work either Downtown or Uptown, I would suggest moving into the City of Cincinnati. Crime has been dramatically reduced over the past few years, Cincinnati Public Schools are poised to be ranked as ‘Effective’ (comparable to most suburban school districts), and there are numerous tax

abatements available to avoid property taxes entirely in some cases up to 20 years…and you could save a lot money on your commuting costs.