The Ohio Film Office is sponsoring a music video challenge that is geared to, “support filmmakers throughout the state while partnering with Ohio educational institutions and musical acts.”

Each production team has three weeks to partner with a musical act, create a concept, shoot the video, edit the video and post it to be judged (rated) on the official YouTube contest page. Winners will receive a prize package that includes a pair of tickets to the Rock and Roll Hall of Fame Induction Ceremony; an array of services from Ante Up Audio, Greg Wilson Photo, KP Photo, Marengo Luxury Spa; meals at Hard Rock Café and House of Blues; and much more.

You can register online and fill out all the necessary release forms on the contest’s website. You can also stay up-to-date through the contest’s Facebook Group. The inquiry deadline is February 25th, with all videos completed and posted by March 11th – so the time to act is now.

Each video must include one of the following criteria:

This is great for the United States and especially great for the Midwest and Ohio. Ohio has been working on right-of-way acquisitions, track upgrades and other items over the past several years to set up for a high-speed rail system operating at 120+mph.

Have you ever wondered how much it would change the face of Ohio? Maybe a Cincinnatian would attend a World Cup Qualifier in Columbus with only a short 1 hour 30 minute train ride. Maybe Cincinnatians would travel north, on a 2.5 hour train ride, to visit Lake Erie during the Summer months instead of taking the 12 hour car ride to Florida.

It makes a lot of sense given Ohio’s population density, distribution and layout. It is one of the most densely populated regions/states in the entire nation and is set up extremely well for this kind of a rail system (Ohio Hub Maps/Plans/Details). 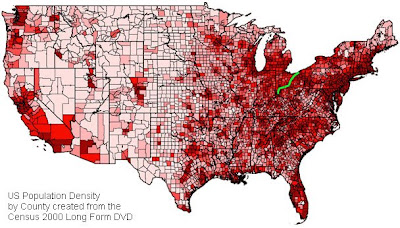 Ohio is poised to get $8.2 billion from the stimulus plan approved today by President Obama. Of this only a portion will go to high-speed rail. Let your representatives know that a significant allocation, of these resources, should go to high-speed rail and that your vote depends on it.

Watch a 1:21 long video about the Ohio Hub system
UPDATE: The FRA has designated ten high-speed corridors under section 1010 of the Intermodal Surface Transportation Act of 1991 (ISTEA) and Section 1103(c) of the Transportation Efficiency Act for the 21st Century (TEA-21). Designation allows a corridor to receive specially targeted funding for highway-rail grade crossing safety improvements, and recognizes the corridor as a potential center of HSR activity. 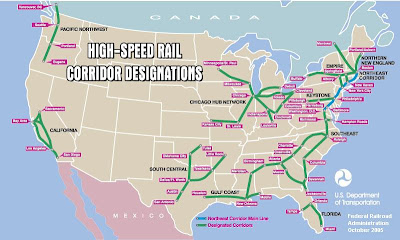