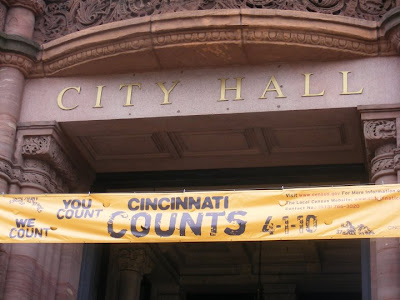 Lower Price Hill, the West End, Over-the-Rhine, Mt. Auburn, Clifton Heights and Corryville make up much of Cincinnati’s center city neighborhoods, and they also represent some of the lowest Census 2010 response rates to date. As of Monday, April 12 most of Cincinnati’s center city neighborhoods were below the 66% national average response rate while the East End, Clifton, Hyde Park, East Walnut Hills and Mt. Lookout all reporting at or above the national average.

A Census tract representing the northern portion of the West End is currently at a low 39%, while two Census tracts representing Pendleton and part of Walnut Hills have registered 43% and 42% response rates respectively. The lowest in the City of Cincinnati is Fay Apartments, an official City neighborhood and its own Census tract, at 34%. The City of Cincinnati in its entirety is at 63%, while Hamilton County has a 71% response rate making it the highest of Ohio’s five most populous counties.

“We are pleased with the appearance of an increase in participation, especially in OTR,” said Katherine Keough-Jurs, Senior City Planner with the City of Cincinnati’s Department of City Planning & Buildings who went on to note that the data collection methods differ from 2000 to 2010 and thus make the numbers more difficult to compare.

“Technically, comparing 2000 to 2010 is little bit like comparing apples and oranges,” Keough-Jurs explained. “Still, we are pleased that so far OTR is showing 40% to 53% participation rates and that some City neighborhoods are as high as 80%.”

The areas surrounding the University of Cincinnati had initially been slow to report and were initially some of the most under-performing in Cincinnati. The past week has seen a rapid increase in the number of responses in these neighborhoods with all now reporting at levels comparable to 2000 Census response rates with months still to go thanks to a 10% surge. 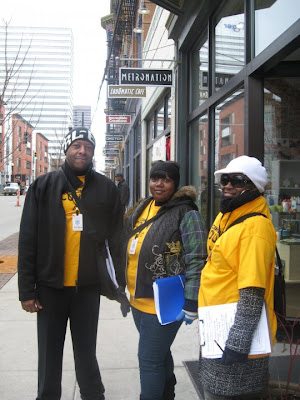 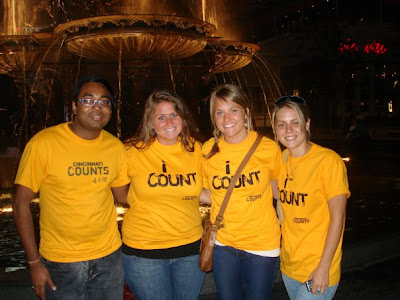 Cincinnati Counts workers have been hitting Cincinnati’s streets for months working to inform people about the 2010 Census. The good looking group on the right is a group of fellow Urban Planning students I knew while at the University of Cincinnati (shout out!).

The real paradigm exists when you move from the difficulties of counting center city populations to their suburban counterparts. As of April 12th, the west side community of Green Township boasted the highest response rate (83%) in the entire nation for communities with more than 50,000 people.

Census workers will continue to visit households that have yet to respond through July to help drive up those response rates before they must, by law, deliver the Census results to the President in December. Keough-Jurs notes that households with forms not turned in by Friday, April 16 may receive a visit from a door-to-door enumerator in May.

“Our 100-plus Complete Count Committee members are still working hard to get the word out that the census is simple, safe and important, and reminding people to complete and return their Census forms,” explained Keough-Jurs.

Those who have lost or have not received a form can pick up an additional form at local libraries and post offices. There are also Be Counted Centers that have forms available, and Questionnaire Assistance Centers that have helpers there to assist individuals with filling out their forms. You can find the closest Be Counted or Questionnaire Assistance Center near you online.

This Week In Soapbox (TWIS) you can read about the $24 million Corryville Crossings project in Uptown, the annual end-of-year DAAP Works exhibition, new development projects in Lower Price Hill, new features at the fabulous Bootsy’s produced by Jeff Ruby, the $10 million master plan project for the Children’s Home of Cincinnati and the scenic view corridor studies being conducted by The Hillside Trust.